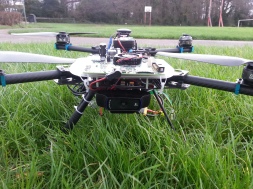 In my last post I discussed my little flying object detector project that I’ve been doing for fun. While it worked it relied on communication with an external laptop in order to work (the on board odroid was not powerful enough to run the convnet model).

Hence, what better excuse to buy an NVIDIA Jetson TK1 dev board which should have more than enough juice to run everything on board the drone itself. As added benefit it should come in useful for my litter robot. I then added websocket support to the flask web app and you can now see the detections appear in real time on a map.

It took some fiddling to get the wifi to work with the Jetson and Im still surprised at how quickly the wifi degrades (even though Im using the 5GHz band to avoid collisions with the Tx/Rx). But it did work in the end:

Still lots to do and too little time, but we keep chipping away. In particular the awesome folk from ErleBotics were kind enough to send me a Brain2, looking forward to try that out as well.

PS: on a related note, love what the guys from vertical.ai are working on 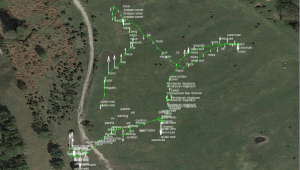 About a year and a half ago I saw Jetpac’s video of their Spotter app and I remember thinking at the time that it would be so cool to get this flying on a drone. I didn’t have the bandwidth to work on it at the time but ended up poking at it with Markus Aschinger at the ASI and with two A level students (Jawad / Isaac) from the Nuffield Foundation. While they did good work and it got me a step closer, it still hadn’t quite come together. Hence I sat down the past week to do a full rewrite, integrate it with a quad I had lying around and do a little demo. The result can be seen in the video below.

END_OF_DOCUMENT_TOKEN_TO_BE_REPLACED 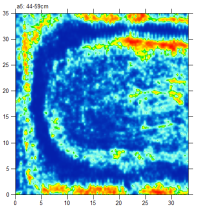 One of the projects that has taken up a lot of my time the past few months is that of a UAV (drone) based Ground Penetrating Radar (GPR) system. There are a number of applications for this but the one we have been focussing on initially is landmine and UXO clearance. The elements that make up such a system are quite broad. Ranging from sensor design, UAV integration, positioning, terrain following to data analysis. As with many drone projects most of the attention tends to go to the hardware and the flying. While that is certainly important and I have been working on those elements too, the whole system is only as good as the quality and interpretability of the data you get back. That is key. With this post I’ll aim to give a brief summary of the work I have been leading on this front.

END_OF_DOCUMENT_TOKEN_TO_BE_REPLACED

Update: Unfortunately I purposely withdrew from the DL meetup after a very unprofessional experience with the co-organisers Persontyle. I Instead I joined forces with the London Machine Learning Meetup.

It has been almost half a year since I announced I would take over the London Big-O Algorithms meetup and bring it back to life. 5 Months later I am very happy to say all has gone extremely well, interest and attendance far exceeding my expectations. We have had a great set of meetups so far and all speaker slots are booked until June with talks from Google, The founder of ZeroMQ, Microsoft Bing, and many others. Really nice to see there is strong interest in good, solid, technical content.

However, enough about Big-O. This post is to announce a new meetup group that I have been convinced into setting up. The Deep Learning London meetup. The aim of this group is to bring together people interested in the family of machine learning methods that are concerned with learning distributed, hierarchical (“deep”) representations. Neural Networks being the most popular implementation. Its an area I have been looking at for a while and will be getting into quite deeply over the next couple of months (no pun intended). The format will be based around guest speakers sharing new research ideas and applications covering a wide range of fields from computer vision and natural language processing to autonomous systems and prognostics.

Note we are not assuming deep learning is the be-all end-all silver bullet of machine learning and welcome critical thoughts and benchmarks.

Sound interesting? Get in touch!